Just when we thought the nasty winter was behind us we get more sub zero temperatures, snow drifts and wind that cuts like a knife.  So I thought it rather appropriate, given the weather, that I give an update on an area of gardening that is always sure to warm you up – Chillies!

After a rather dismal growing season in the chilli department last year I was wondering whether to grow chillies again this time but as any chilli fan knows, you just can’t let them lie.  Chillies must be grown, it’s a need!

So it was with great trepidation that I bought all new varieties of seeds to sow and was also kindly given some seeds by Chris Saunders from the Chilie Foundary to have a go at too.

My choices this year came from other chilli growers who recommended their favourite varieties and where I couldn’t obtain them I got as close to the variety as I could.

I also did something else new this year.  For the first time ever I purchased a heated propagator.  After much researching and debating over size, KWs etc I settled on a medium Sankey propagator.  With seeds and compost I was ready to go.

That made a total of 58 seeds.

I didn’t want to over crowd the propagator and didn’t know really what to expect from it so just the 58 it was.

After two weeks of sitting in the outside shed it was apparent the propagator wasn’t being aided what so ever by the weather.  The cold was too much for it or the seeds to stand, so indoors came the propagator.

By this point it was obvious I may well have been putting too much hope on just the propagator.  For one thing it was only heating the very central points of the base.  Nice and warm, but not right to the edges of the base as I had been expected which meant that every seed line sown would have each end left precarious out in the cold edge.

Once inside the seedlings slowly began to appear and by the 15th March those having germinated were now ready for potting on. 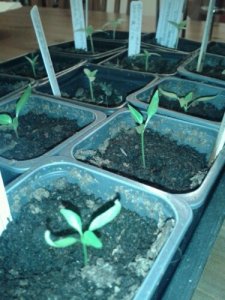 Out of the 58 sown – just 26 germinated.  A smattering of all the varieties apart from the Aji Umba.  Zero.  It may have been that they needed longer to germinate but after five weeks nothing had been thus far spotted. 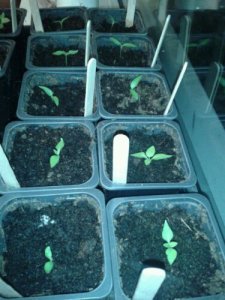 Not to be knocked back by the first sowing I got the propagator cleaned and back ready for sowing that same March day:

Fortunately not only did I have a few remaining Aji seeds but I also had a few more new varieties to try out as well.

This time the seeds were kept closer to the centre of the base and the propagator has been kept indoors.

This year I’ve told myself not to be caught up in the quantity.  It’s all about looking after the few.  Getting them to flower and fruit well enough for me to be able to experiment in cooking with chillies, and preserving them.

I’m being much more selective with the inside space I am ‘allowed’ in the house (before the Boss gets fed up with all the trays and pots), and can concentrate on getting these to a size ready for the grow house later in the year.

After all, in this weather I’m using hot chilli sauce in nearly everything I eat.  It just can’t be beaten in these cold freezing temperatures for warming your insides up.