Blimey it’s gone from the quiet life to full buzz in my garden within the last month.

You have to have eyes in the back of your head just to keep every thing in check.  Not that I’m complaining, in fact I love it!  The back garden has finally become the self-sufficiency/Kitchen garden haven I had been dreaming of for so many yrs.

I’ve included a few photo’s in this post but for more on how the plants are growing month on month, please visit my photo album, over here. 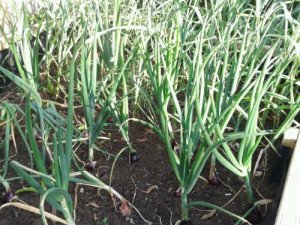 Since flowering the mange tout have gone into pod over-drive.  In fact I’ve got a glut of them now.  It’s great to wander about in the garden and just pick a pod off to nibble on if I fancy.  I can’t remember (and wished I’d noted somewhere) how many plants I’d put into the ground.  I think it was 12 (but not totally sure).  I’m weighing the peas as they come into be eaten though.  So far we’ve had about 250g (not inc the ones I’ve snaffled) and plenty more to go.

Every time I think the onions are ready to be pulled they keep growing!  The bolting has stopped (thank goodness).  The tops are just beginning to flop so not long now.

The garlic is slightly more worrying – the tops are already beginning to die back and yet I can’t see one bulb above the soil level, and even when I try to push the soil away from the base of the plants still nothing so I’m fearing the worst on these.

About five beetroot’s are ready to be eaten.  The potatoes look like triffids they are that big.  It’s the first time I’ve grown them in these beds so quite excited to see how they turn out.  As they are only flowering I don’t think I’ll be pulling them out until next month.

The cabbages and purple sprouting broccoli both ‘look’ very healthy.  The fleece is so far managing to now keep the creepies away although I do have to keep a very close eye on them since the last invasion.  I think my plant to spacing ratio is a little off with these and the’re all fighting for what little space is left.  Must be more careful next yr.

More triffids appear to be residing in my grow house in the form of tomato plants.  They have all now reached the roof of the house and show no signs of stopping.  I’ve never seen such tall tomato plants before and can only think this is the perfect home for them, and they like the seaweed liquid fertilizer.  I am a little concerned that greenfly has started to invade the house but I’m spraying and rubbing out as many as I can (when I see them).

I potted up the last of my chillies plants a week ago and they are now residing in their along with an aubergine which was too healthy not to pot on so that’s in there too.  It’s no longer a ‘walk-in’ grow house!

Chillies are all doing well in their little grow house.  Both the blueberry plants and the blackcurrant plant have fruited well.  I’ve eaten one handful of blueberries and I reckon there’s another two at least – if I can keep the blackbird off long enough who seems to think it’s his personal snack bar.  I had no idea what to do with the blackcurrants.  There wasn’t enough to make jam or juice from them (it’s only a yr old), so my Twitter pals came to my aid and suggested muffins.

I won’t be winning any muffin competitions any time soon, especially when I misread the basic instructions and added a table spoon rather than a teaspoon of salt in the recipe but they taste great and I’ve used up the berries.

Both the plum and apple trees are shooting more growth now.  The espalier materials have been bought and I’m hoping to get these ready and constructed this week. 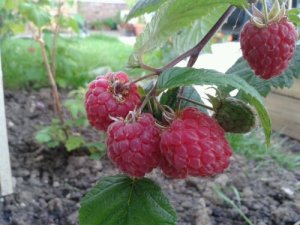 I fear the raspberry canes are on a road to no-where.  All ten canes are showing signs of yellowing leaves turning to brown and finally falling off.  One cane is now completely leafless and show no further growth.  I did some research on this and it’s either a soil disease or root root.  Neither of which are going to help the poor canes.

I’m a little confused by the potential issues on the canes though.  For one thing if it was a disease how the hell could it travel so far and wide?  I have four canes in one area, four in another, and two in a pot and all 10 are effected?  I’m wondering now if it isn’t the stock itself.

I dug the most effected cane up to look at it’s roots and growth is definitely and issues.  Clearly the soil isn’t suitable which is my fault.  It’s heavily compacted clay soil which needed much greater lime and manure adding.  I didn’t prepare it well enough so lesson learn there.  I dug another cane up and this had far more roots on it but again it’s not stopping the yellowing leaves.

One cane has actually fruited so at least if nothing else I’ve received four raspberries for my troubles (bah!). 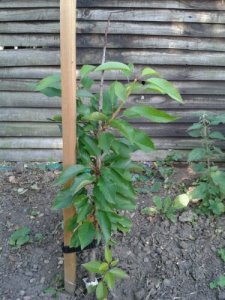 Greenfly attacked the hazelnut filberts so I thought the horticultural soap solution would work, it did but perhaps too well as all the leaves I sprayed appear to be dying!  I’m not too worried as I haven’t done untold damage but more lessons learnt.

I take back my June’s rhubarb comment – there is stalks to be had this year because it’s growing so well but apparently I can only take three in the first yr.  Not sure if 3 will be good for anything but I’ll find out!

The cherry tree has recovered it’s growth from the dead top  it had earlier in the yr (frost and the fact it was planted brought that about), and is shooting well now.

So that’s what’s going on in my plot, what’s happening over in yours?

19 responses to “Self Sufficiency Update – July”