We’ve had a fair amount of sunshine in March and April although it’s actually raining today (Typical but saves me watering today – bonus!).

Last month was quite eventful in the Forget-me-Not garden, which I’ll tell you more a bit later on in this post.  Needless to say, as all good gardens grow April is going to be another busy month.

Below you’ll find  a selection of jobs I need to get done in the garden over April and a helpful list of jobs that can be done in and around your garden at this time of the year too.

I’ll add my photo’s at the beginning of each post so if you haven’t got time to read you can quickly glance at the garden’s update.

As always, let me know what you think.  Is it useful or just a pain to read? 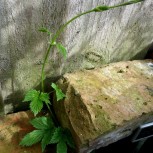 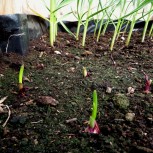 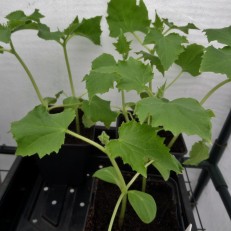 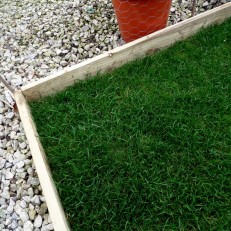 The rocket is now starting to take off.  It certainly took longer than I imagined.  I thought salad leaves were supposed to be a quick growing crop?  So far it’s been seven weeks already and I’m not able to pick any of the leaves quite yet.

Other seeds indoors are the tomatoes and chillies, both of which are growing slowly but surely.

The garden connect raised bed is now on it’s way with various seeds planted in that.  One bed has onion and garlic sown.  The onions are just starting to sprout while the garlic is well on it’s way.  I realised with learning new planting methods through Garden Connect that I could really have doubled my sowing of onion sets due to the spacing elements so I’ve also sown some seed onions in the left over space which although a bit too late to sow will at least aid to the crop already planted, if not all at the same time.

Alas the sweet peas have just not been able to germinate.  Not sure why.  Could be seed viability, could be fluctuation in temperatures, could even be the fact I didn’t sow them until February.  Whatever it is they didn’t like it and out of the 128 sown I’ve just got five plants to show for it.  Bit disappointing but to be honest I’ll just make extra good use of the ones that have come up and be sure to plant earlier next year.

The hostas, chives and parsley are all showing good growth now and have been put out into the garden.

That just leaves the other posts of seeds sown including garlic chives, butter-nut squash, parsnips (which I am still waiting patiently for to germinate), and chamomile all waiting to germinate in the grow-house.

All of a sudden the plum has burst into life with fresh leaves and growth.  The apple is slightly behind but is just starting to wake up now with it’s most extended buds bursting into life.

Managed to buy another blackcurrant plant from a discount store the other day.  They are pretty hardy things.  Not two days after soaking the root ball and planting it into a container it started to sprout.

The other patio fruit and the hops are all showing lots of signs of life.  The hop has released three shoots which are already about 15cm and will need to be strung to the fence soon.

Hmm, the lawn.  Well where do I begin on this score?

As you know we opted to get in a landscaper to lay the back lawn for us and to sort the very end of the front garden as both areas had become quite unwieldy.

I think the experience has taught me a lot, although it has been a very expensive lesson to learn.  And while I was completely furious with the outcomes of both gardens this has lasted only with myself, and now I and have come to willingly accept the work that has now been completed.

I have no qualms with the quality of the turf.  It’s very good.  Nor can I complain about the end of the front garden, it looks good.

It’s just the attitude of the landscaper and perhaps my expectations of this work was way beyond what I was quoted for.

I was left with a thick wooden edging around the back lawn so high it means I can’t cut the grass to the edge.  What I wanted was a 40cm border around the lawn (as I had perennials to plants back from where they came), but somehow while the wood edging is great for a border it’s ridiculously high for a lawn, and I have been left with no border to put my plants in.

The lawn has not been levelled up, as I kept asking to be done because the whole garden slopes down towards the house.  Not massively, and fortunately not enough that any rain causes massive run off but still, I was expecting a bit more levelling.  Apparently this is not what the landscaper thought.

The front lawn that has been laid also isn’t to level with the rest of the lawn.  Should this be done?  I would have thought so considering the sheer amount of excess soil he had to shift but apparently not.  He would rather have just laid the whole lawn from fresh (to some considerable expense I would imagine).

The landscaper was carefully chosen so I have only myself to blame but I thought I was going to get a very good service.  What I ended up with was a lad (in company uniform), who thought it was okay to work when he wanted (I had to keep chasing to get him to finish the job), for short hours (the whole job only took 7 hours over two days), and while extremely friendly when giving the quote turned out off handish, dismissive of my requests and didn’t at any time offer any advice or tips to my garden as soon as the work started.

It was obvious that he didn’t think the job was worth his time and yet it certainly wasn’t cheap for me.  It was also extremely stressful and pushed my abilities to the limit at being able to deal with suck awkwardness, which I don’t like.

Like I said, it could be my expectations but I also feel that it’s an experience I will not be repeating.  Our garden is special, and I’d expect anyone else who did work in it (just as you do a house) to have the same kind of enthusiasm or at least some form of engagement.  I will not be recommending the company, and I doubt for all my chasing up to get the edging completed to proper form I will be hearing from him again.

Here is a before and after photo of the front garden:

Anyway moving on the job’s done and it looks okay.  I’ve spent a good deal of time watering the lawns so they are already looking very green and starting to grow.  The front garden will not take up much less time on the maintenance front now.

The native hedge is very much bursting into life.  All saplings have growth showing so that’s good news.

The cherry is actually blossoming this yr.

The nut hedge is also springing into life so apart from watering there isn’t much work required out the front at the minute.

My top three jobs to do in April

Garden jobs to do around the garden in April:

So, what will you be up to in the garden this month?

2 responses to “Self Sufficiency Garden – April”