Good and bad news to share from the Forget-me-Not- cultivation garden this month because as summer is just upon us I’ve been battling bugs and planting to ensure cultivation of crops continues!

As always, let me know what you think.  Is it useful or just a pain to read? 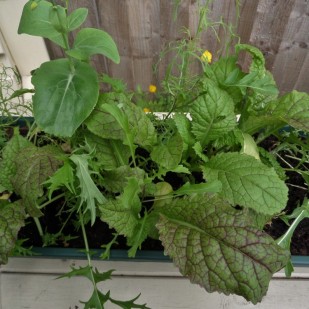 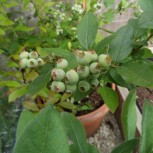 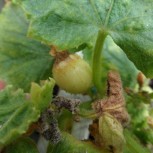 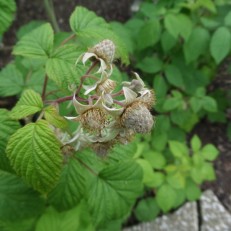 Me and salad leaves or anything remotely related to lettuce appear to work.  I’ve now tried rocket, sowing and rocket plug plants and neither have been all that successful.

I bought a tray of plug salads and added them to my long windowsill container.  They seemed to take okay but it wasn’t long really before they were bolting and covered in greenfly at which point I was screwing my face up into rather frustrated positions.

Yes the kitchen was probably too warm, and no I didn’t over water them, but to me it all seems rather a lot of effort for very little return.  So far I’ve had about five meals from the salad bar, and while I’ve shoved the container outside now I’m still having to actually buy lettuce as it’s not growing quick enough (bar the bolting) to be eaten (and it’s a long container!).

I’m convinced it can’t really be this hard to grow?  Maybe I need to think more in terms of the position of the container?  Would it be suited it a more north facing place?

All the beds are full and growing.  Well, all bar one – the runner bean bed.  I planted 8 plants (grown from seed) and slowly but surely they have all wilted and died.  I also put seeds into the bed as back up because the plant’s didn’t look all that good when I planted them (hoping for miracles), but as yet any seedlings have yet to appear.  In the same bed I also planted sweetcorn and nothing.

With the sweetcorn I know it’s the seed that’s the problem.  It may also be the same problem affecting the beans but as the bed was deeply composted with new compost added I don’t think it’s a soil problem.  The only other thing that may have caused (or compelled) the growing could have been the hot weather?

Still the good news is the garlic is ready to be lifted.  Unfortunately I got a bad case of garlic rust but the garlic bulbs are okay and can be used.  It’s spread to the onions but again the bulbs are okay.  Weather (warm and wet) is again probably to blame for this, along with more compact growing styles that I’ve been experimenting with.  Unfortunately there isn’t really any cure for the rust apart from removing all effected leaves and binning (not in the composter).

The garden connect bed has really taken off and it won’t be long before harvesting takes place on some of the squares.#

The potato bed is just flowering, while the strawberry bed is nicely flowering too.  In fact the first harvest of fruit took place last night and they tasted delicious.

The squash bed is growing slowly but surely.  The slugs tried to attack the plants but I got in first with some nifty wool pellets.

This area contains two chilli plants and two tomato plants now, all growing well.  Considering it’s been so wet and hot I think I’ve managed to keep the temperatures pretty constant which the tomatoes and chillies are responding too.  Both are showing flowers now.

Good grief this bit is slightly depressing so scroll on if needs be.  Our apple tree got severely effected by black aphids (cherry aphids) to the point where the little tree is looking rather bare.  The leaves literally had their being’s sucked out leaving a black and disfigured leaf behind before it eventually just drops off the branch.  I tried in vain to keep the hoards or aphid down but it was already too late when I’d seen them last month.  It’s been bad enough to stop the next tier of branches from forming.

Fortunately as bad as it looks the worst of the infestation is now over and the espalier is already beginning to grow new shoots and leaves (so much grateful sighing at that point).  Unfiortun

Okay, good news in this area.  The hops are winding their way across the patio to the kitchen roof via horizontal string paths.  The blueberries and the black current bushes are fruiting well.  Fruit will be ready for harvesting in the next couple of weeks.

I’ve also added to the area by purchasing another blueberry plant (two is not enough for my love of these berries), and a new redcurrant.

Lawn, yup still there.  It’s got brown patches but don’t get me started on that.  I’ve got drainage issues – surprise surprise so now I spend every Sat spiking the lawn.

The wildlife area is busy with baby starlings and blackbirds.  Why is it that bird seed has no problem germinating everywhere?!

The raspberry plants are tall and also fruiting now.  Like last year a lot of the lower leaves of the plants are starting to turn yellow.  I looked into this and apparently it could be a soil deficiency so I bought some epsom salts and watered the raspberries (and the cucs) in the salts in the hopes it helps.

All doing well out here.  The new native hedging is above waist height now.

The cob bushes have really expanded and are also growing well.  As is the rhubarb.

Unfortunately the cherry tree suffered the same fate as the apple espalier and had the attach of black fly.  It’s just starting to recover and it’s not growing much which is slightly disappointing, in contrast to the ornamental cherry that I moved a year ago and has shot up.

My top three jobs to do in June

Garden jobs to do around the garden in June

So, what will you be up to in the garden this month?

6 responses to “Self Sufficiency Garden – June”