It’s rather a confusing set up regarding the word chilli (or chile), that means capsicum.

So be confused no more, the answer has now been made clear in a poster created by the New Mexico State University Chile Pepper Institute (or just good old NMSU CPI). 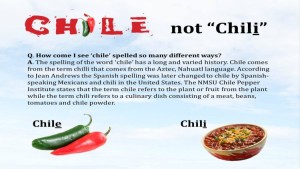 There is one word for the plant’s fruit and another for the food created with it.

Which basically means I now need to go through all my posts and amend the word chilli (notice I usually spell it with two l’s), and get them corrected to chiles (which sounds more like a posh child at Eton)

But hang on – what is this I see over in the on-line dictionary, where apparently there are varied spellings and depending on where you live very much depends on local variation.

The spelling used in Europe and noticeably in Britain appears to be…Chillies. And it doesn’t just stop there.  If you visit the Chile Pepper Institutes FAQ page on their website they do indeed state the following:

Q. How come I see ‘chile’ spelled so many different ways? A. The spelling of the word ‘chile’ has a long and varied history. Chile comes from the term chilli that comes from the Aztec, Nahuatl language. According to Jean Andrews the Spanish spelling was later changed to chile by Spanish-speaking Mexicans and chili in the United States. Here at the CPI we state that the term chile refers to the plant or fruit from the plant while the term chili refers to a culinary dish consisting of a meat, beans, tomatoes and chile powder.

So, it seems to me (this is my logic), that if the capsicum originated from South America, notably around the places the old Aztec resided then surely the spelling chilli is thus correct? Or maybe we should just call it by it’s scientific name of capsicum (genus, part of the nightshade family)?

What do you think?

12 responses to “Chile, Chilli or Chili?”